Elvis the Duck and the Application of Sales Persistence 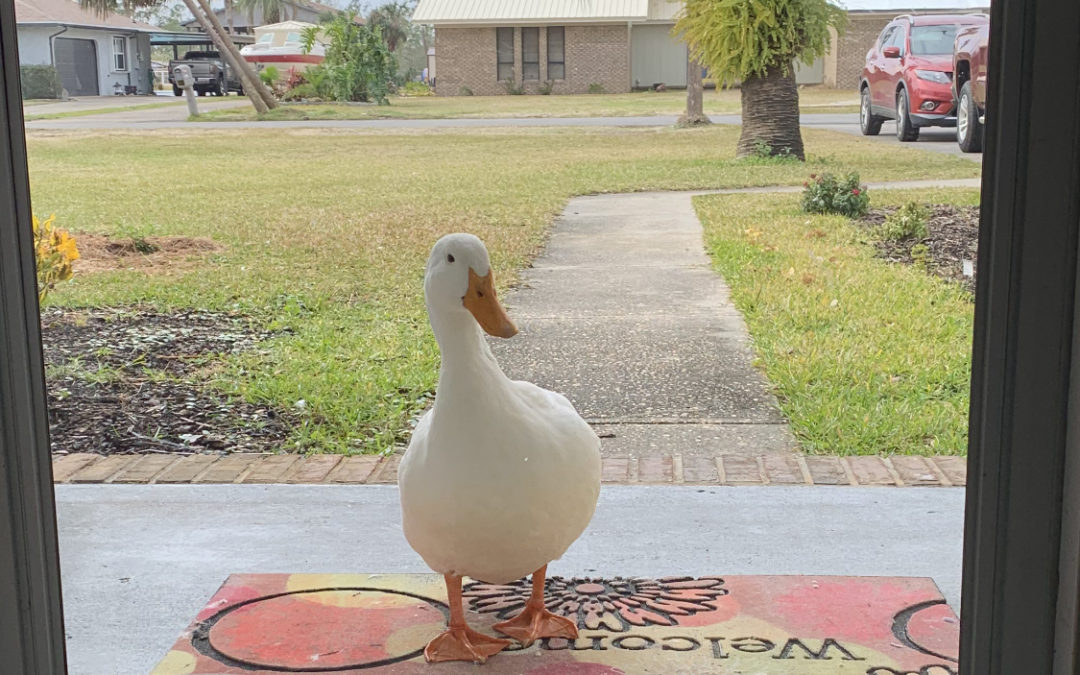 My neighbor Jim has a pet duck.

He didn’t buy or rescue said duck, as much as the duck sold Jim and his wife into adopting him and feeding him and his girlfriend. Jim was sold because Mr Duck (named Elvis) was an expert at the proper application of the concept of sales persistence.

I can see Jim’s front door from my house. One day I noticed a duck literally knocking on his front door and I just had to talk to Jim to get the explanation. This story is true, although some details might have been changed to protect the guilty or due to my failing memory.

A little background for reference. I live in a canal neighborhood. In between some of the streets are canals that most houses back up to. Some houses have a boat dock, because these canals all feed into West Bay, where there is good fishing and good tubing waves to bounce the kids around about on weekends. The canals are full of wildlife. Redfish, Catfish, Trout, Herons, Ibis, and even the dolphins occasionally visit (the marine mammals, not the football team). I’ll post photos on the Sales Fix Linkedin and Facebook pages of the dolphins swimming under my dock. We also have ducks. Mallards and the bigger white feathered Peking ducks can often be seen in people’s backyards (minus those of us who own dogs, of course).

A while back, a pair of Peking ducks took a serious liking to Jim’s backyard. They often jumped the low wall onto his lawn and hung out there, and since both Jim and his wife are very animal friendly, they took to feeding the ducks on occasion.

The female duck (Priscilla) is rather shy, and usually jumps back into the water when they are being fed or approached. The male duck Elvis, however, is a born salesman. When the feedings were not frequent enough, Elvis took to quacking loudly until they were fed. He quickly figured out the prime time of day where Jim or his wife are likely to be home, and targeted that time to jump onto the lawn and quack. Knowing your prospect’s habits is an excellent sales skill. Like I said, Elvis has serious game when it comes to sales and prospecting. Not surprisingly, Elvis and Priscilla wanted to be fed more and more often. Instead of just quaking louder and more often, which was showing diminishing returns, Elvis the sales pro upped the ante (I think he subscribed to the weekly sales fix, for the record). He took to the habit of walking all the way across the lawn to the back porch of the house and helping himself to munchies in the cat food bowl. If you’ve never seen a duck eat cat food out of a dish, let me tell you it is quite a messy sight, with cat food being flicked all over the place.

The mess Elvis kept making literally trained Jim and his wife to feed them more often (I think the cats were complaining about the theft of their food). Training your customers is important, and Elvis knew that. He didn’t just keep trying the same quacking approach. He found another way, another approach to get what he wanted. It worked.

But it didn’t end there. Eventually, the cat bowls were relocated or not refilled frequently enough for Elvis, and like a tried and true sales professional, he changed his approach again. Elvis tapped at the back door with his beak. When that didn’t work (the back door is often closed and kind of out of hearing range from the main rooms of the house), Elvis got into the habit of actually walking around the house and tapping at the front door with his beak, because Jim likes to only close the glass storm door so he can see his front yard from the main living room. Elvis is a duck, so he likely didn’t calculate the hearing range of humans from the front door compared to the back door. I hadn’t trained him on the ROI yet, so his math skills were not at that level. What he did figure out, was that tapping at the back door was not working. So once again, he changed his game. He persisted. He tried something else. He literally went knocking on doors. Elvis makes cold calls!

Persistently doing the same thing that doesn’t work isn’t laudable. It’s idiotic. It is the definition of insanity to do the same thing but expect a different result. You don’t have to be Einstein to know that. Even a duck (albeit a duck trained in sales by yours truly) can figure that out. Persistence is NOT about stubbornly continuing to do the same thing. It is about continuing to try, but to try different approaches, different tactics, until you find what works. Sales professionals understand that just because it worked yesterday, last week, last year, doesn’t mean it will always work. When it stops working, you try something else. You use a different approach. You knock on a different door.

Don’t let yourself be outsmarted by a duck. Persistence of effort is a key success factor, but modify your approach when you need to.

By the way, if you want to see a hilarious video of Elvis knocking on the storm door, go check out the Sales Fix Pages on Linkedin or Facebook.